Put simply an Arduino is a small electronics board that contains a microcontroller and various components to allow programing and implementation of  several input and output ports.  These ports can be used to collect data and interact with the outside world with the use of sensors and devices.  The data collected can be stored or used in real time to control devices such as  lights, motors, displays etc..

It is open source hardware,  based on an Atmel microcontroller.  Because it is open source there are lots of clones on the market,  particularly from China. These clones are very cheap and usually work as well as the genuine Arduino.

So what are the practical uses for these devices? Well if you google "Arduino projects" you will find millions of pages on the subject, most of which are simple projects, like switching a LED or relay on and off but many are far more complex like Quadcopters and semi autonomous robots.  Arduinos are often used as part of IoT (Internet of Things), enabling them to communicate with, or be controlled from the internet.

The Arduino boards come in many flavours the Mega, Uno, Nano and Pro Mini to name a few.

The Mega as its name suggests, is the largest of the tradition boards with 54 general purpose input/output pins (GPIO), it also has  256kB of memory and the Pro Mini is the smallest with 14 GPIO pins and 32kB, the same as the Uno. The Pro Mini does not have a USB connector for power and programing, so a separate FTDI USB to serial adaptor is required. There is a lesser version of the pro mini with only 16kB of memory it runs at 3.3V and 8Mz the others mentioned all run at 5V and 16Mz. There is an other  version that has the same form factor as the Mega, it has 512kB of memory and runs at 84Mz and 3.3V, it is called the "Due". 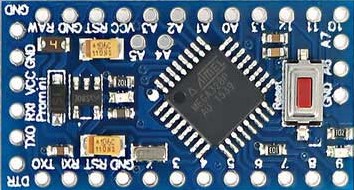